What’s The Difference Between Wiring Batteries in Series Vs Parallel?

The main difference in wiring batteries in series vs. parallel is the impact on the output voltage and the capacity of the battery system. Batteries wired in series will have their voltages added together. Batteries wired in parallel will have their capacities (measured in amp-hours) added together. However, the total available energy (measured in watt-hours) in both configurations is the same. 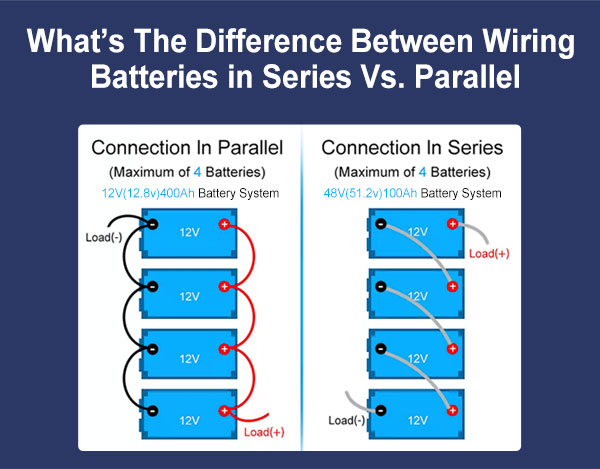 batteries wired in series and parallel configurations should all have the same voltage and capacity rating. Mixing and matching voltages and capacities can lead to problems that may damage your batteries.

If you are going to have more than one battery in your system you are going to have to decide how you’re going to wire them, series or parallel. There are advantages and disadvantages to both but ultimately it comes down to what the devices you are powering require for voltage. Power is measured in watts and without getting too much into the physics of electricity watts is divided into volts and amps. You have a limited ability to manipulate the voltage and the amperage by either connecting them in series or parallel but no matter what the watts stay the same.

Series connections involve connecting 2 or more batteries together to increase the voltage of the battery system but keeps the same amp-hour rating. Keep in mind in series connections each battery needs to have the same voltage and capacity rating, or you can end up damaging the battery. To connect batteries in series, you connect the positive terminal of one battery to the negative of another until the desired voltage is achieved. When charging batteries in series, you need to utilize a charger that matches the system voltage. We recommend you charge each battery individually, with a multi-bank charger, to avoid an imbalance between batteries.

In the image below, there are two 12V batteries connected in series which turns this battery bank into a 24V system. You can also see that the bank still has a total capacity rating of 100 Ah. 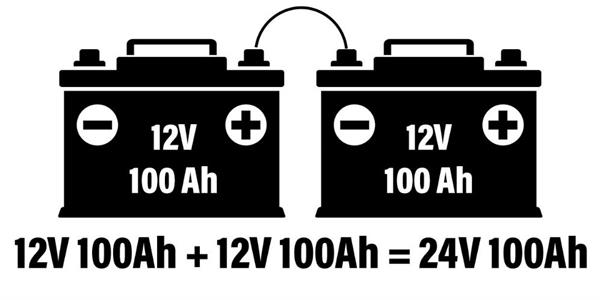 It has a simple design that is easy to understand.

It does not overheat quickly.

It has a higher output voltage so that we can add more power appliances.

It carries the same current throughout the circuit.

Disadvantage of a series circuit

If the total number of components increases in the circuit, circuit resistance will more.

If a fault occurs at one point, the total circuit will break.

Connecting a battery in parallel is when you connect two or more batteries together to increase the amp-hour capacity. With a parallel battery connection the capacity will increase, however the battery voltage will remain the same.

For example, if you connect four 12V 200Ah batteries in parallel, you would get a 12V 800Ah battery system.

For example, let's say you needed a 12V 600Ah battery system. You will need to connect three 12V 200Ah batteries together in parallel.

Parallel battery configuration helps increase the duration in which batteries can power equipment, but due to the increased amp-hour capacity they can take longer to charge than series connected batteries. This time can safely be reduced, without damaging the batteries, by charging faster. Now that the battery is larger, a higher current charge is still the same percentage of the total capacity, and each battery 'feels' a smaller current. 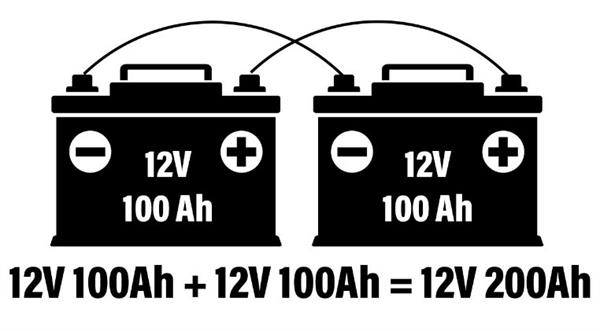 2.      In a parallel circuit, the voltage across every component is the same; therefore, all components work efficiently.

3.      In a parallel circuit, you can easily connect or disconnect a new component without affecting the working of another component.

1.      In a parallel circuit, we cannot apply an additional voltage source.

2.      A parallel circuit requires lots of wires for connection.

How Many Batteries Can You Wire In Series?

How Many Batteries Can You Wire In Parallel?

With very large parallel battery banks comes much higher current availability as well. This means the proper system fusing is critical to prevent accidental shorts that could have catastrophic consequences with so much current available.

If you take these two batteries and connect them in series it will double the voltage but keep the available amperage the same.

And if you now take the batteries and connect them in parallel it will double the amp hours while keeping the voltage the same.

This relationship holds true no matter how many batteries you add to the system.

This would be used to increase battery storage by adding batteries in one voltage and then increasing the voltage to another. An example of this would be using 6v golf cart batteries but still wanting 12v output.

Using four 6v 180Ah batteries would give us the same 4320watts as our first example, now to get it up to 12v and only 12v. If we series the batteries in pares then connect them in parallel we would get the 12 volts we are looking for. You’re essentially treating two 6v as one 12v.

And this can be done by combining as many batteries as needed to obtain the capacity you are looking for.

What is Korea KC Battery Certification 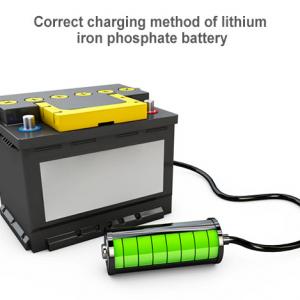 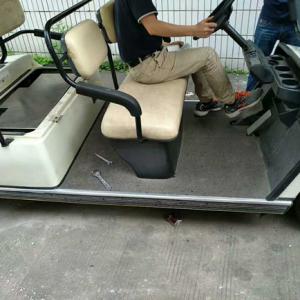